Always B Magic was able to make it a clean sweep in the Game of Claims Series, taking the $15,000 final Sunday, March 1 at The Downs at Mohegan Sun Pocono. Driven by George Napolitano Jr. for trainer Susan Marshall, the Indiana sired Always a Virgin gelding is now on a three-race win streak. 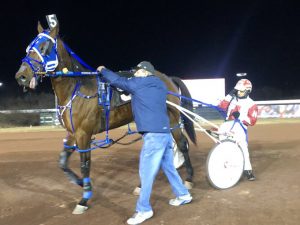 Starting from post five, Always B Magic didn’t get a view of the pylons early on, parked to the three-quarter mile marker before getting over to the rail for the stretch drive. Naked City and Jim Marohn Jr. came at them hard in the lane, but Always B Magic held him off by a nose for the win in 1:55.0.

Now owned by John and Susan Marshall, who claimed him out of the second leg of the series, Always B Magic earned his 12th career win in his 99th career start with earnings over the $113,000 mark. The six-year-old gelding started off his career under the direction of Brian Brown at Harrah’s Hoosier Park at two, winning the Indiana Sires Stakes consolation. The six-year-old was bred by Emerald Highlands Farm of Mount Vernon, Ohio and is from the 100 percent producing mare Special Magic, who earned a mark of 1:51.3 herself with earnings in excess of $340,000.

Always B Magic is a brother to Special Forces, Ideal Magic and Bruce’s Magic, who all have marks under the 1:50 time barrier. He will have a two-year-old half-sister by Rockin Image on the track next year named Magical Annie.