Always a Prince was stepping up into a group of tough open pacers for Saturday’s $350,000 TVG Open Pace final and made the rest of the field work to catch him, posting a wire to wire victory in a time of 1:48.2. The four-year-old Indiana sired son of Always a Virgin was a winner by four and three-quarter lengths in a time of 1:49.2, pacing his final quarter in 26.1 at The Meadowlands. 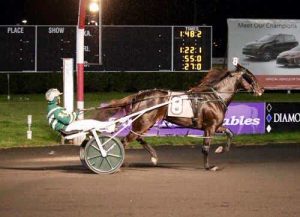 Always a Prince stepped up to defeat open pacers in the TVG Final at The Meadowlands Saturday, Nov. 23. Photo by Derick Giwner

Driven by Yannick Gingras, Always a Prince moved out quickly to the lead from post eight, posting fractions of :27, :55, and 1:22.1 before extending his lead for the win. He is owned by Carl and Melanie Atley and trained by Tyler George. Bred by Emerald Highlands Farm, Always a Prince paid $12.00 to win in the race where the top six finishers paced under the 1:50 time barrier, including McWicked and Brian Sears.

It was the final career start for McWicked, who had a special retirement ceremony in the winner’s circle with trainer Casie Coleman. His shoes were pulled to mark the end of a spectacular career for the eight-year-old’s $5 million dollar earnings winner. McWicked was included in the Dan Patch Stakes in recent years at Harrah’s Hoosier Park. McWicked finished fifth in his final start, pacing his mile in 1:49.4.