In addition to a story on the Trottingbred industry in Northern Indiana, James Platz provided a profile on Indiana’s three-year-old and Pacer of the Year in the September issue of “Hoof Beats.” Now four, Always A Prince has ventured out onto the national ranks and holding his own. 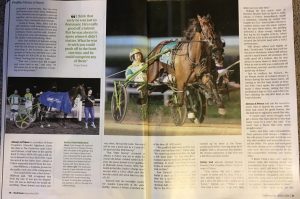 Always a Prince was featured in the September issue of “Hoof Beats.” The story, penned by James Platz, takes a look at his success on the national level this season.

Owned by Carl and Melanie Atley of Xenia, Ohio, Always A Prince has accumulated more than $122,000 this year with two wins in 12 starts racing against some of the best older pacers in the nation. The Always A Virgin horse lowered his career best time to 1:47.3 at The Meadowlands in the $50,000 Graduate Series and was raced timed in 1:46.2 at The Meadowlands this summer.

Always A Prince recently returned to the Midwest with Trainer Tyler George and competed in the $330,000 Dan Patch Stakes at Harrah’s Hoosier Park. On Saturday, Sept. 7, he competed in the $440,000 Jim Ewart Memorial, finishing eighth with driver Trace Tetrick. Beaten four lengths for the win, Always A Prince paced his mile in 1:49.4 at Scioto Downs in the mile won by McWicked and Brian Sears in 1:49.0.