Fresh off his victory in the $220,000 Indiana Sires Stakes Super Final for three-year-old pacing colts and geldings, Always A Prince is leading the way to become Hoosier Park’s record holder for most wins in one season. The Always A Virgin gelding has scored 16 wins thus far with one month left for the 2018 racing season. 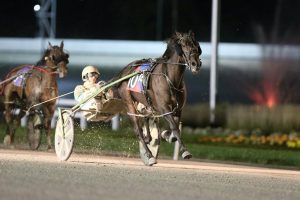 Perfect Illusion from the Dwayne Pletcher Stable was the first to catapult to the top, scoring 15 wins during the 1999 racing season. Others have scored in the double-digit win column over the years, including Homicide Hunter with 15 wins in 2015. Both Seventimesavirgin and Swan Chase each picked up 13 wins in 2016 and 2017, respectively, but Always A Prince has already surpassed those horses in wins this season, and he’s not done yet.

Trained by Tyler George, Always A Prince was unraced at two, picking up a qualifying win at Scioto Downs in 1:56.0 before waiting for his racing debut as a three-year-old in 2018. With more than $375,000 in earnings, the sophomore pacer lowered his career best in mid-September to 1:48.3.

Always A Prince is owned by Carl and Melanie Atley of Xenia, Ohio. He was bred by Emerald Highlands Farm in Mt. Vernon, Ohio. Initially trained by Bill Dailey, Trace Tetrick has been behind the talented Indiana sired colt in all but three of his 20 starts this season. He is currently on a six-race win streak.