2018 Indiana Pacer of the Year Always a Prince just added another accolade to his already impressive resume. The four-year-old gelded son of Always A Virgin stopped the timer in 1:48.1, equaling the track record at Harrah’s Hoosier Park Friday, May 17. 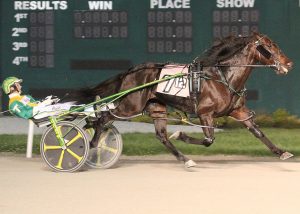 Always a Prince and Trace Tetrick earned another track record Friday, May 17 in a time of 1:48.1, equaling the record for older pacing geldings at Harrah’s Hoosier Park. (Photo by Linscott Photography)

Driven by Trace Tetrick, Always a Prince started his mile from post four in the field reduced to five. Docdor Friskie and Brandon Bates led the way through the first quarter in :26.3 before Always a Prince came rolling out and onto the lead by the halfway marker in :54.2. Tetrick kept the gelding in full gear as he continued to dominate, pacing home in :26.1 for the victory in 1:48.1, equaling the track record for older geldings that was set by Split the House and Brett Miller in 2017.

Owned by Carl and Melanie Atley of Ohio, Always A Prince boosted his career earnings to more than $513,000. The mark was also a career best for the Tyler George-trained horse. He is now 20-25 in his career and the victory is the second track record owned by Always A Prince, who also holds the three-year-old gelding record at 1:48.3.

“We haven’t figured out where we are going next,” said George in a Harrah’s Hoosier Park press release. “We will probably try to get another start here. He’s got the Battle of Lake Erie but we’ll see how it goes.”

Later in the night, Tetrick also connected for his third win behind fan favorite Freaky Feet Pete, who won his second consecutive race in a time of 1:49.1.