Alvin Walther, longtime Standardbred breeder, owner, trainer and driver in the state of Indiana, was the subject of a full page feature in The Corydon Democrat Wednesday, Aug. 29. The Lanesville, Ind. resident talked about his decades in the business, and at the age of 82, is still raising Standardbreds. 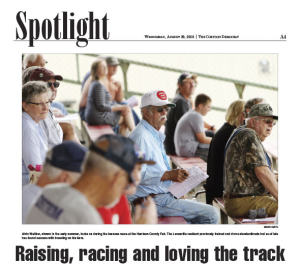 Alvin Walther watches the races at the Harrison County Fair. Photo taken by the Corydon Democrat

According to the article penned by Brian Smith, sports editor of The Corydon Democrat, Walther got his start from a mare that a neighbor couldn’t get in foal. That mare was bred to H.T. Nick, who later produced Pacifier, and Walther was in the business. Other horses that have fared well for Walther include Meanie Jeanne, who he raised a foal with called Slip Slidin Myway, Al’s Romeo, Cadillac Style and in more recent years, Kieanna’s Angel, who Walter purchased at the sale for $1,000.  The Indiana-bred daughter of Personal Power went on to win 18 races and more than $135,000 in career earnings with a best time of 1:53.1 taken at Indiana Downs in 2006.

More importantly for Walther, Kieanna’s Angel produced some fast foals including Enoch, who took a mark of 1:49.1 and made over $178,000 and Rockin TJ, who as a two-year-old this season has already earned a mark of 1:55.2. Walther has a weanling filly by Always A Virgin, Angel’s Destiny, who will in the sale next fall.

Walther focused strictly on breeding Standardbreds on his farm now. He gave up training and driving several years ago, but continues to enjoy trips to the races and is always in the stands at the Harrison County Fairgrounds each year for the harness racing sessions.