All the Truth and Kiss the Captain represented the Macomber barn well Wednesday, Oct. 27 at Harrah’s Hoosier Park. Kiss the Captain and driver Ricky Macomber Jr. earned a near gate to wire victory in conditioned pace action to kick off the night. The sophomore filly posted a time of 1:52.2 in the event. 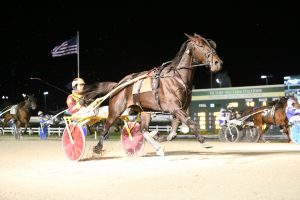 All the Truth was one of two winners on the card for the Ricky and Jamie Macomber team Wednesday, Oct. 27. Photo by Dean Gillette

Starting from post five, Kiss the Captain and Macomber went straight out for the lead and were held wide early on before getting the first call on the outside at the quarter in :26.1. From there Macomber was able to get a breather during the middle stages of the race before fending off late closers in the lane. Kiss the Captain held strong, scoring the win by one-half length over Sunrise Sweetie and Michael Oosting. Finleys Filly and Casey Leonard finished third another half-length back.

Kiss the Captain was the favorite, paying $8.40 for the win. The Captaintreacherous three-year-old is owned by Martin Budkey and A. Harris Racing LLC. The New York bred filly is trained by Jamie Macomber and now has four wins in 11 starts for 2021 after being lightly raced at two last year, competing at Harrah’s Philadelphia.

Kiss the Captain has won two of her three starts at Harrah’s Hoosier Park since joining the Macomber barn. Her career best time of 1:51.4 was taken earlier this year at Harrah’s Philadelphia.

It was one of two wins on the card for the Macomber team. A few races later, they scored a win with All the Truth in conditioned trotting action. The Swan for All three-year-old moved to the lead around the final turn and trotted home for the win, three-quarters of a length ahead of Major Hooligan and Andy Shetler. ER Nelson and Don Eash finished third.

All the Truth paid $5.40 for the win. The gelding is owned by Doug Overhiser, Fred Wittmer and Jamie Macomber. Steven Mast bred the sophomore, who earned his first win of 2021 in the effort. The time of 1:56.0 also marked a new career best for All the Truth.

Overhiser was in the news last week for purchasing the highest priced Indiana sired yearling in history at the Hoosier Classic Yearling Sale. Bourbon Courage, a half brother to Hambo winner Captain Corey, was knocked down for $255,000 to Overhiser, who is from Illinois. Overhiser has invented heavily in the sport of harness racing over the past few years and has horses with several trainers across North America, including Macomber.