All Star Swan earned her first career win Thursday, Nov. 4 at Harrah’s Hoosier Park with a time of 1:57.2. The freshman filly was coming off a second-place finish in the Indiana Sires Stakes Consolation last week. 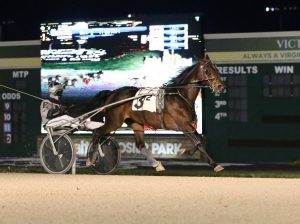 Trained and driven by Don Eash, All Star Swan got away in mid pack before pulling to the outside and heading to the lead at the half in :58.1. Once on top, the Swan for All filly was in full control, trotting home in :28.2 for the win by three lengths. First N Line and Sam Widger finished second over Fashion Baby and Atlee Bender for third.

All Star Swan was the favorite of the field, paying $4.20 for the win. She is owned by Eash Racing Stable Inc. and was bred by David Nissley. She was making her 12th start of the year and has been competing in the Indiana Sires Stakes series all season long.

All Star Swan was purchased out of the Michiana Classic Yearling Sale last fall for $8,000. She is out of the tough race mare Cincinnati Star, who earned a mark of 1:56.0 during her career and made more than $589,000 in purses. The mare was a major contender on the Indiana Sires Stakes circuit during her racing career before becoming a brood mare. She was campaigned by trainer Steve Carter during her career.

All Star Swan is one of five of racing age out of Cincinnati Star with four taking marks. All five have raced and All Star Swan now becomes the fastest of the lot. She has a half-brother, Cincinnati Help, by Helpisontheway, who is a yearling this year.