After All Paul and Doug Rideout looked dominant in their division of the $10,000 Cliff Booth series at Harrah’s Hoosier Park Thursday, June 18. The duo trotted the mile in 1:54.4, traveling through the final panel in :27.4. 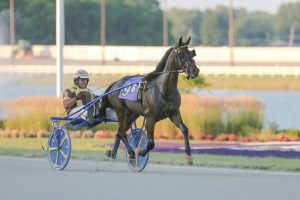 After All Paul, shown with trainer-driver Doug Rideout from a race in 2019, won a division of the Cliff Booth series Thursday, June 18 at Harrah’s Hoosier Park. Photo by Dean Gillette

Starting from post six in the 10-horse lineup, J-S Ivan the Great and Alex Udell rallied out for the early lead and passed by the quarter in :28.2. However, it didn’t take long for After All Paul to move out and take over by the halfway point in :57.2. From there, Rideout kept the three-year-old Swan for All gelding focused on the front, trotting home to a one-length win over Simply Swan and Joe Putnam. Givemeacookie and John DeLong finished third.

After All Paul is owned by Julie Rideout, Pete Schmucker Jr. and Glider Stables. The mile in the Booth series marked a new career time for the trotter in his first start of 2020. He now has more than $75,000 in earnings for his connections.

Another Swan for All three-year-old was successful in the other division of the Cliff Booth series. Starting from post 10 in the second tier, Swan in Motion and Ricky Macomber Jr. came from off the tempo to swoop in late for a two-length win over Dude Included and DeLong. Anchors Away and James Yoder rounded out the trifecta.

Three miles on the Thursday card were recorded under the 1:52 time barrier. Genie Rockwell, driven by Marlin Fry for James Yoder, won a division of the Rick Dalton in 1:51.2. Sweet Filly, trained by Shane Bowermaster, was a winner by a big margin of 11 one-quarter lengths in 1:51.4 with Michael Oosting in the bike. Comaneci and Peter Wrenn were also victorious in the Dalton Series with a mile turned in of 1:51.4.