It’s been a big week for trainer-driver Doug Rideout. His stable has had numerous wins on both the Indiana Sired Fair Circuit as well as Harrah’s Hoosier Park. His latest trip to the winner’s circle was behind After All Paul in the Thursday, July 9 featured $10,000 Indiana Sires Stakes Eligible event. 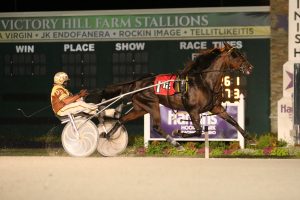 After All Paul and Doug Rideout were comfortable winners in the Indiana Sires Stakes Eligible event Thurs. July 9 at Harrah’s Hoosier Park. Photo by Dean Gillette

Starting from post one, After All Paul had some early speed but got away fourth as several rushed out to secure the top spot. Osprey Hanover and LeWayne Miller got the first quarter call in :28.3 with Just Like Fire and Joey Putnam on the outside.

Once the dust settled, Rideout had After All Paul out and moving toward the lead, a position he secured just after the halfway marker in :57.3. From there, the Swan for All sophomore picked up the tempo, trotting home in :28.4 for the three and one-half length victory in 1:55.0. Swan Legacy and Dan Shetler moved up for second followed by Mr Wisconsin and John DeLong, who closed well from the back of the pack for third.

After All Paul is owned by Julie Rideout, Pete Schmucker Jr. and Glider Stables, all of Indiana. The gelding was bred by Bobby Brower and Mystical Marker Farms. After All Paul is now two for four this season and took a new career best time of 1:54.4 earlier this year. He has now accumulated more than $80,000 in career earnings.