Adamsville Road made a big statement in his first win of 2022. The Indiana sired gelding rolled home victorious in a time of 1:56.2, a new lifetime mark at Miami Valley Raceway. 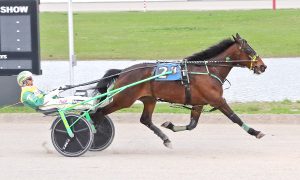 Starting from post two, Adamsville Road got away third as Sandis Commando L and Hank LeVan got the advantage inside and Sound of Music Deo and Aaron Merriman joined them on the outside at the quarter in :28.0. Once they were settled Adamsville Road was out and moving at the half in :57.3. He remained parked on the outside at the three-quarters in 1:27.0 before pulling away from the field by six at the top of the stretch and was an eventual winner by nine lengths. Queen’s Future and Brett Miller moved up for second over Cleopatra As and Tony Hall for third.

Adamsville Road paid $11.40 for the win. The Swan for All gelding is trained by John Ryan Melsheimer and is owned by Mel Rose Stable and Joe Nesselroad of Ohio. Joyce McClelland bred the gelding, who competed in Indiana Sires Stakes action last year at two at Harrah’s Hoosier Park.

Adamsville Road is out of the Yankee Glide mare She Wore Red, who took a mark of 1:53.2 and earned nearly $200,000 during her racing career. She has a two-year-old colt this season named Burton’s Hill by What the Hill. She also has a yearling filly who is a full sister to Adamsville Road named Red Swan.

Adamsville Road was purchased by his connections from the Lexington Select Yearling Sale for $7,000.

Another Indiana sired winner on the program was Gerardo from the Kayne Kauffman barn. The seven-year-old Rockin Image gelding, owned by Mark Bogen, was flushed out first over at the half and grinded his way to the lead in the final strides for the win by one-half length in 1:54.1. JJ Tanner and Jeremy Smith finished second over Franksnativewestrn and Josh Sutton for third.