Act of Faith, a three-year-old daughter of Swan for All, is getting closer to her sophomore debut. The filly won her qualifier at Pinehurst, North Carolina Friday, April 24 for Hochstetler Racing. 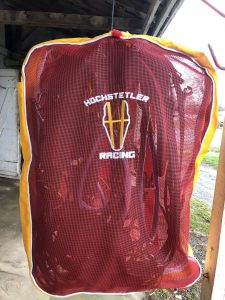 Homer, Jay and Connie Hochstetler have several Indiana sired young horses prepping for the upcoming season at Harrah’s Hoosier Park, including Act of Faith who was a winner in qualifying action Friday, April 24. Photo from Hochstetler Racing

Starting from post three, Act of Faith went straight for the lead with trainer-driver Homer Hochstetler at the controls. She set fractions of :30.4, 1:00.4, and 1:30.3 for a well-balanced mile to score the win by two lengths in 2:00.4.

Owned by Connie Hochstetler, Robert Buddig and Allen Schwartz, Act of Faith made her first start for 2020 in the qualifier. She competed at Harrah’s Hoosier Park last year under the direction of Dale Hiteman for the Hochstetler barn, earning a time of 1:58.1 and purse money just under the $20,000 mark. Act of Faith is a homebred filly bred by Homer Hochstetler and Robert Buddig. She is a full sister to Nothing But Muscle, who has a mark of 1:55.0 and earnings over the $100,000 mark. Act of Faith also has a two-year-old full sister named Sister Jean who is prepping for her freshman year at the Hochstetler Stable.