ABC Show Time and driver Don Harmon turned in an impressive mile in the Indiana Sires Stakes eligible three-year-old colt trotters Wednesday, June 2. The duo covered the distance in a time of 1:55.2 with a final panel in :28.3. 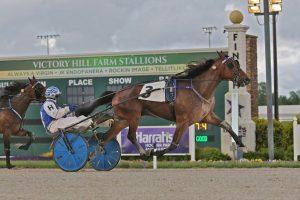 Starting from post three, Harmon was able to secure the two hole early with ABC Show Time behind race favorite No Lingering and Trace Tetrick. Fractions of :27.4, :57.1 and 1:26.4 were established before ABC Show Time kicking into his closing gear, trotting past No Lingering for the win by one and three-quarter lengths. ER Nelson and Don Eash finished third.

A bit of a surprise, ABC Show Time paid $7.60 for the win. The ABC Garland gelding is owned and trained by Krista Harmon. Timothy Russell of Kentucky bred the sophomore. It was his first career win with the mile now marking his record. After four starts last year at two, ABC Showtime was making his second stat of 2021.

In the filly division of sophomore trotters, freshman standout Shirley Goodness and LeWayne Miller trotted home strong for the win in 1:56.3. The Swan for All filly got away in mid-pack before taking over after the half in :59.0 and trotting right on by the field, winning by three lengths as the race favorite. No Parking Zone and Robert Taylor finished second over Sister Jean and Trace Tetrick for third.

Shirley Goodness, also trained by Miller, is owned by Bill Beechy, Bradley Maxwell and Kenneth Frieder. Alan Troyer and Larry Troyer bred the filly, who was making her first start of 2021. She won five of nine starts last year as a two-year-old and amassed more than $134,000 in earnings. Her career best time remains at 1:54.4 taken last year.