ABC Garland was one of the first trotting sires in Indiana that saw a ton of success. Probably his most famous foal was the great ABC Mercedes, who took a mark of 1:53.1 and made more than $1 million. Foals have been limited since 2013, but one four-year-old is carrying on the family tradition. ABC Show Time earned a hard-fought win at The Meadows Wednesday, Nov. 30. 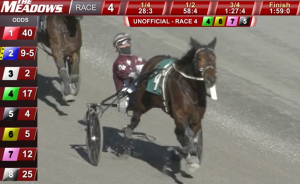 ABC Show Time and trainer-driver Nick Roland left alertly to snag the two hole behind early race leader New Westerville and Brian Zendt, who passed by the quarter in :28.3. With a slower second quarter, Roland, who hails from Iowa, moved ABC Show Time out and around to the lead, setting middle fractions of :58.4 and 1:27.4.

Heading into the stretch, ABC Show Time had an open length advantage on the field of claiming conditioned trotters. The four-year-old was able to pull away from the field for a three and three-quarter length win in 1:59.0. Muscle Mex and Dan Charlino finished second over Dilly Dilly Dunn and Ronnie Wrenn Jr. for third.

ABC Show Time was a longshot in the lineup, paying $36.40 for the win. The gelding is owned by Michael Wolf of Florida and was bred by Tim Russell of Kentucky. It was his second win of the season, winning a race earlier this year at Running Aces. His overall best time was taken last year as a three-year-old at Harrah’s Hoosier Park in 1:55.2. ABC Show Time now has more than $50,000 on his card. It was his first career start at The Meadows.

A son of Horseshowmom, ABC Show Time was only one of two foals by ABC Garland to sell as a yearling in 2017. He brought $18,000 through the Hoosier Classic Yearling Sale that fall. He is a full brother to Diamond Dagger, who earned a mark of 1:53.2 during her career and made more than $300,000 on the track. The family also includes Show Me a Million, a two-year-old son of Swan in a Million, who raced in Indiana this year and took a mark of 1:57.4.

ABC Garland has produced 27 racehorses with six figure earnings. In addition to ABC Mercedes, his richest, he produced Lakeview Fest, the richest female with $467,000. Other top performers for him included ABC Bay Bee, ABC Muscles Boy, C-O-TO Bluegrass, Solvent, and My Uncle Cuz, who has the quickest mark of 1:52.0.

ABC Garland has three registered foals this year and six that are yearlings this year with none going through the sales ring. He had six foals registered in the two-year-old ranks this year with one sold at public auction at the Midwest Mixed Sale for a price tag of $15,000. The filly is named ABC Letmebe.