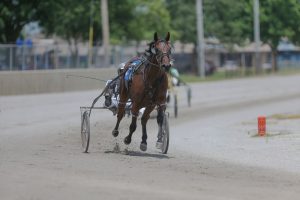 Rose Run Vision, shown earlier this year at Frankfort with trainer-driver Don Eash, was a winner in the two-year-old pacing filly ranks Saturday, Sept. 28 at Corydon. Photo by Dean Gillette

In the first division, ER Harper Rose, who started from the second tier, had a delayed move toward the front for Eash. The Riggins Filly began to advance at the half and kept pursuing the front, finally getting the best of Saltwater Gospel and Charlie Conrad at the finish line by a neck in 2:02.3. Owned by Eash Racing Stable, ER Harper Rose recorded her sixth win of the season in 15 starts and increased her bankroll to more than $17,000 with the victory.

In the second division, Eash sent out Rose Run Vision front post two to confront Moscato and Conrad at the halfway mark. The Time to Roll filly was persistent and finally got the lead and the win by one and one-quarter lengths in a time of 2:02.0. Moscato was second over Vel Miss Fire and Jay Cross for third. The win was the fourth of the year for Rose Run Vision and an earnings boost to more than $14,000.