Shamwow “wowed” the crowd Wednesday, May 15 at Harrah’s Hoosier Park. The first-time starter from the Missy Essig Stable rallied home in 1:51.4, his first career start, to take top honors in a division of the Tony Stark pacing series. 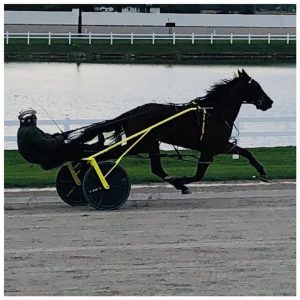 Shamwow is shown in a training mile at Harrah’s Hoosier Park prior to his first qualifier with Joe Essig Jr. at the controls. (Photo by Missy Essig)

A son of Always A Virgin, Shamwow and driver Mike Oosting did not make much of an impact at the beginning of the race, but that scenario quickly changed. Oosting had the three-year-old gelding out just before the half and was able to flush out cover that carried him around the turn. In the stretch, Shamwow hit another gear and rolled right on by his opponents, turning in a final panel in :26.3 for the win by two and one-half lengths over Thrills N Chills and Jared Seekman. Race favorite Townline Shady Boy and Trace Tetrick finished third.

Shamwow is owned and bred by Jeff Fought’s Cornerstone Stock Farm of Shipshewana, Ind. He came into the race off two qualifiers at Hoosier Park after training during the winter in Florida with the Essig Stable.

Shamwow has the pedigree to excel at racing. His dam, Bolero Takara, is also the dam of Shamballa, the standout older pacer with earnings in excess of $883,000 and a career mark of 1:47.1, and still counting. Shamballa, a son of Somebeachsomewhere, is currently racing on the East Coast.

Out of 12 foals of which Shamwow is the 11th and a two-year-old, Big Peeps, has not started yet, only one of the foals out of Bolero Takara has not raced.  Six of her foals have in excess of $200,000 in earnings and four have marks under the 1:50 time barrier. Shamwow is also a full sister to Takara Rose, stakes winner at Harrah’s Hoosier Park. Takara Rose, also owned by Cornerstone Stock Farm, was bred last season to JK Endofanera.