Dan Patch is an icon and an Indiana hero. Hoosier Park was built around the premise of the great free-legged pacer, from the street address to the track’s signature event, the Dan Patch Stakes. His story is well known to millions of people over many decades and his name stood the test of time on a plethora of items, from washing machines to cars. However, there have been some undertones about the actual facts surrounding Dan Patch. Dean Hoffman, longtime editor of Hoof Beats who is now enjoying retirement, penned a story in the most recent issue of Hoof Beats on some of the facts that offer questions about Dan Patch. 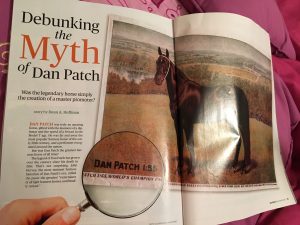 Dean Hoffman takes a look at some of the facts surrounding Dan Patch in the latest issue of “Hoof Beats.” (Photo from Hoof Beats)

Hoffman points out that Dan Patch was a great racehorse. He also points out that his owner, M.W. Savage, was a great salesman and used the horse as a way to sell products and promote his business. Hoffman notes Dan Patch’s record of 1:55 was never recognized by any official organization and that Savage advertised it as such. The actual record that was recognized was 1:55 ½ and was taken in a unique way, trailing behind a Thoroughbred with a sulky containing a wind screen to help block any wind resistance. The story also questions other moves by the management of Dan Patch.

Regardless of one’s beliefs, it’s a great story and once again, gives Dan Patch a spotlight more than 100 years after his death. It gives a different take on one of the sports most celebrated athletes and is worth the read.