When Harrah’s Hoosier Park opens for its 26th season of Standardbred racing Friday, March 29, a new series of races will be unveiled. The Claiming Challenge will provide horses in the claiming ranks with purses in excess of $300,000 over 12 different classes, featuring an elimination and a final for each one. 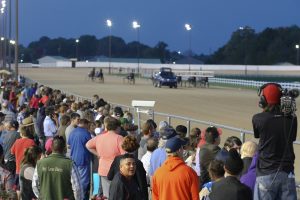 Racing fans will get a treat this year the new Claiming Challenge at Harrah’s Hoosier Park. The 12-event series kicks off during opening weekend Friday, March 29 and Saturday, March 30. (Photo by Dean Gillette)

The first round of eliminations involved in The Claiming Challenge are slated for opening weekend. Races featured during the Friday-Saturday night events include The Sycamore, the Iron Lady, The Sapphire, The USTA, The September 11th Memorial, The Uno Mas Modelo, The Catholic Cowboy, The Diamond, The Mega Bowl, The Armed Forces, The USS Arizona Memorial, and The Vietnam Veterans Memorial. Each race in the series required at least a $300 entry fee with a minimum of $17,500 set for the finals. All entry fees are added to the final purse, with sixth through last place receiving $250 in the elimination and sixth through last place in the final receiving $750.

“One of our goals this year is to bolster the claiming program at Harrah’s Hoosier Park,” said Rick Moore, vice president and general manager of racing at Harrah’s Hoosier Park via a recent press release. “I believe The Claiming Challenge is a great first step in achieving that goal and lets the horsemen know that the claiming horse is an integral part of our overall racing program.”

The Claiming Challenge is held for both trotters and pacers. The claiming tags range from $5,000 to $30,000 with the series open to all horses.