The champions of the 2022 season were honored at the annual Indiana Standardbred Awards Banquet Saturday, January 21 at the Embassy Suites in Noblesville. The event was held in front of a full house with approximately 400 people in attendance. 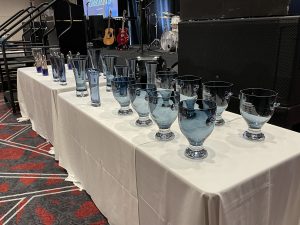 The Indiana Standardbred Banquet attracted approximately 400 people to honor the champions of 2022 in Indiana. Photo by Tammy Knox

Presented by the Indiana Standardbred Association (ISA), the Standardbred Advisory Board, and Harrah’s Hoosier Park, the evening started off honoring outgoing president Joe Putnam. Other individual awards were presented to Jeff Cullipher, outgoing ISA Director Recognition, and three ISA Special Recognition Awards honoring a trio of people that have tirelessly worked to promote racing in recent years. James Platz, Jacob Rheinheimer and Ellen Taylor were each honored for their commitment and work in the state.

Trace Tetrick was once again honored as the Pari-Mutuel Driver of the Year with Tyler George earning Pari-Mutuel Trainer of the Year. Doug Rideout was the top driver and trainer on the Indiana Sired Fair Circuit (ISFC).

The program, which was emceed by Kevin Mack, concluded with numerous drawings for door prizes followed by a live band with dancing available at the venue.

A full list of champions will be provided in the upcoming March issue of the ISA Magazine, due the first week of March.