The annual Indiana Standardbred Awards Banquet was held Saturday, Jan. 22 featuring the champions of 2021, both equine and human. The event was emceed by Kevin Mack for the first time at the Embassy Suites Conference Center in Noblesville, Ind. After missing a year of honoring the state’s top performers for 2020 due to COVID-19 restrictions, the event was back in full force with a packed house for the event as ISA President Joe Putnam kicked off the event. 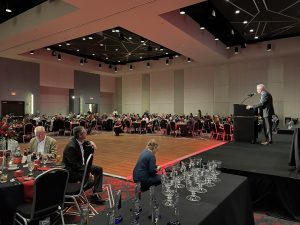 Sponsored by the Indiana Standardbred Association (ISA), Standardbred Advisory Board and Harrah’s Hoosier Park, the banquet began by honoring three outgoing ISA Directors Brandon Bates, Wilbur Eash and Richard Keaton. The ISA also presented a Special Recognition Award to longtime Indiana announcer Steve Cross. Cross was joined by his wife, Darlene, son Jate and daughter in law, Marcie, for the presentation. His son, Josiah, was not in attendance due to participating in his high school’s musical competition at Indiana Weslyan University.

Cross started announcing at the age of 19 at the county fairs and his 32-year career took him through pari-mutuel stops such as Raceway Park, Scioto Downs, Pompano Park and for the past 23 years at Harrah’s Hoosier Park. The native of Middlebury, Ind. now concentrates on running the Hoosier Classic Yearling Sale each year and its subsidiary sales the Michiana Classic Yearling Sale and the Buckeye Classic Yearling Sale.

“It’s been a great ride,” said Cross. “After 32 years of calling races, I never considered it a job. I always loved to do it.”

Following the Special Recognition Award to Cross, two younger racing enthusiasts were recognized as the ISA Youth of the Year. David Wickey and Dianna Detweiler were present for their awards. David is a 14 year old from Monroe, Ind. who enjoys hunting, football and spending time with friends outside of helping his family with their training business. Dianna, a 15-year-old from Milroy, helps her family with their stable and also enjoys spending time with friends outside of work.

The banquet also included awards to the top drivers and trainers of the year. Trace Tetrick was the top pari-mutuel driver in the state again, winning 403 races from 1,877 starts with purses of nearly $5 million. Tyler George was the top pari-mutuel trainer with 119 wins in 363 starts and horses under his care earning $1.1 million.

Doug Rideout has an outstanding season on the Indiana Sired Fair Circuit, winning both the driver and trainer title. As a trainer, he had 68 wins and as a driver he had 85 wins.

The final human awards during the event recognized the top breeders. The small breeder award was presented to Concord Stud Farm LLC of New Jersey. They were the breeders of three Indiana sired horses, including Swingforthefences.

The large breeder of the year was Victory Hill Farm, who earned the honor for the seventh straight year. They had 81 starters in 2021 with nearly $1 million of the total money earned of $2.5 million gathered in Indiana. Their top performer was Little Rocket Man.

Equine winners for the 2021 racing season will be showcased in a story on the ISA Website for Sunday, Jan. 23.