The 2019 Stallion Directory, produced by the Indiana Standardbred Association, is arriving in homes this week. The publication, which showcases all the stallions in the Standardbred industry in the state of Indiana, was mailed Friday, Jan. 4, 2019 and has already started hitting homes. 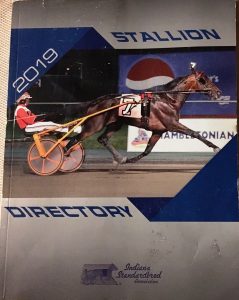 The 2019 Indiana Stallion Directory, produced by the Indiana Standardbred Association, is now available and dropping in mailboxes this week. Mr Cantab is the featured sire for the 2019 edition of the publication.

The cover of the Stallion Directory highlights an Indiana sire and this year’s stallion is Mr Cantab. The now 13-year-old son of Cantab Hall captured the world’s attention this past fall as the sire of Homicide Hunter, who earned a time of 1:48.4 in the $145,000 Allerage Farms Open at The Red Mile. His time is the fastest mile ever trotted in the history of the sport.

Mr. Cantab stood under the Mr Cantab Syndicate at Hoosier Standardbred Farm in Montgomery, Ind. from 2011 until the summer of 2018. He was purchased by John Hershberger’s Hershy Acres of Topeka, Ind. and will stand at that location beginning in 2019.