The nominations deadline for 2019 Caretaker of the Year is quickly approaching. Trainers, owners and industry personnel have until Friday, Dec. 20 to get all nominations in for the award to honor those who work diligently with the industry’s equine athletes. 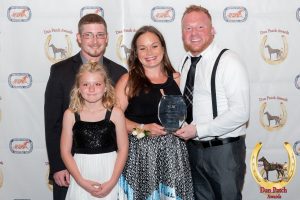 Shelia Napier, 2018 Caretaker of the Year, is shown accepting her award from Aaron Merriman at the Dan Patch Awards last February. Photo by Chris Tully

The national award re-emerged in 2015 and is now sponsored by Fair Island Farm and the United States Harness Writers Association.

The recipient of the Fair Island Farm Caretaker of the Year will receive $500, a trophy and transportation costs to the USHWA Dan Path Awards banquet in Orlando Feb. 23, 2020. The winner will be recognized during the year-end awards show.

To nominate a caretaker, send in a letter or an email with a 200-word minimum on an individual that goes above and beyond while working with Standardbreds. Letters should be sent to Tim Bojarski at a159star@gmail.com or by mail at 7523 Maple Road, Akron, KY 14001.